Our Chevrolet story begins back in 1880 when my Great Grandfather, Hurdsfield Salter was born in the gold rush town of Ballarat, in Victoria, Australia.

He married my Great Grandmother Eliza Pyke and they had 5 Children together, my Grandfather Ernie being their youngest child.

Hurdsfield and Eliza Salter were dairy farmers and had a farm in Redan on Yarrowee Parade which follows the Yarrowee creek through Ballarat.

Business was going OK and they had saved enough money where they had a small surplus, plus they had won a little money on the 1929 Melbourne Cup where Nightmarch was the winner, followed by Paquito in second place and Phar Lap in third place.
The great depression hit the world the month before the Melbourne Cup on October 29, 1929 and left the world scrambling for money and security.

The Australian Government was threatening to rip money from peoples bank accounts to help the economy and Hurdsfield and Eliza were not going to lose their money that they had saved up from hard work on the farm and the money they had won from the 1929 Melbourne Cup, they decided to spend their money and purchase a car. 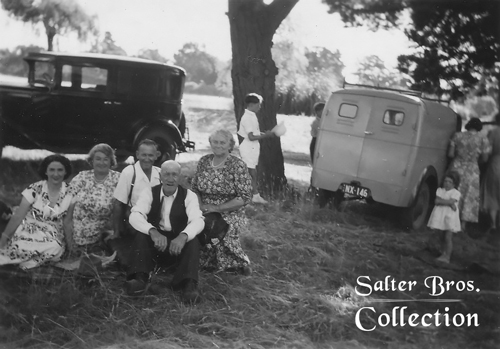 The Royal Melbourne Show was held in September 1930 and they decided to attend the show with the family and they ended up putting down a £5 deposit on the display model 1930 Chevrolet that Stokoe motors had on display.
The 1930 Chevrolet, or as the family refers to it, “The Old Chev” had also been on display at the Royal Sydney Show in 1930.

Once the car had finished all of its shows, it was then delivered by Stokoe Motors on 19th January 1931 to the farm at Redan in Ballarat, and put in the shed once they paid the remaining balance of £290.

In the shed would be where it would stay as Hurdsfield and Eliza didn’t have a drivers licence and would never get one. They had to wait until their eldest son George Salter would come of age and get his licence at age 18 on the 9th of May 1932.
After George obtained his licence, the Old Chev was then registered and insured to be driven on the road.

The Old Chev would often be driven to Daylesford for family picnics where the portable gramophone would accompany the car to provide entertainment on the picnic.

Sunday was a day of rest on the farm for the horses and the boys would remove the backseat from the Old Chev and fill it with milk cans to do their daily delivery run.

Over the years the Old Chev gave excellent service to all members of the family and very little trouble.
In 1953 Hurdsfield Salter died and the ownership of the car was given to my Grandfather, Ernie Salter, the youngest son of Hurdsfield and Eliza Salter.
Prior to Hurdsfield’s death, Ernie was already driving and maintaining the car. He drove it to his work at the Tramways in Ballarat where he was a Cabinet Maker and later when the Tramways was bought out by the S.E.C he transferred over to them.

The car wasn’t just a country car, it was driven a lot. It would frequently do trips to Adelaide, Mildura and Melbourne to see family.

In 1966 the car was taken off the road and put back into the same shed that Stokoe Motors had delivered the car to in 1931. The shed doors remained closed until 1970 when (Nana) Eliza Salter died and the house was sold.

The car was then moved to opposite (Nana and Grandpa’s) Ruby and Ernie’s house and stored at a neighbours house under tarps until 1972, when my father, Greg Salter talked Grandpa Ernie into seeing if the car would still run.

Ernie obliged and one Saturday afternoon a 6 volt battery was put into the car, some petrol into the fuel tank, checking the ignition points the engine was turned over by hand with the crank handle until fuel was present in the carby.

The choke and spark knobs were both pulled out and the starting handle cranked and within 6 turns the engine was running. The spark and choke were then both pushed in and the engine ran for over an hour until it was turned off.

Because my father, Greg Salter showed so much interest in the Old Chev, it was given to him by his father Ernie.
In 1983 when Mum and Dad purchased their first home, Dad picked up the Old Chev from the neighbours house and drove it to his new home and put in the shed. 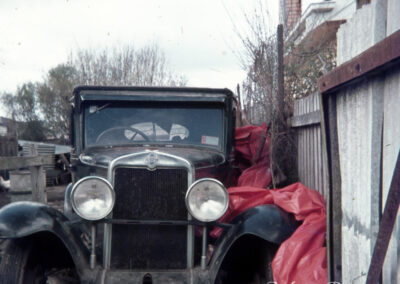 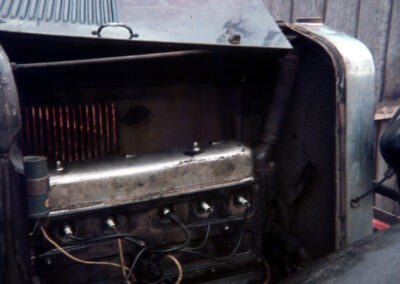 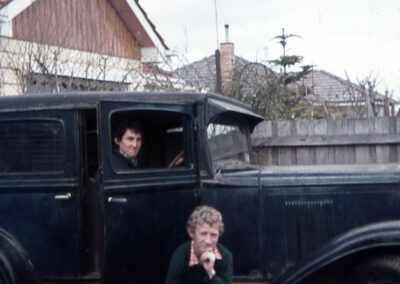 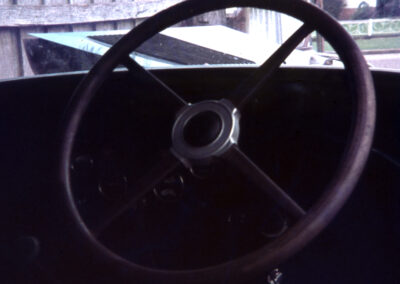 The Old Chev is currently being restored to its former glory.