ALTHOUGH trade with Spain is fraught with the difficulties prevalent in so many parts of the world today British tourists to this delightful sun-drenched country never fail to be impressed by the number of Villiers-engined motor cycles and two- and three-wheeled runabouts which are to be found in the principal towns and cities.

These engines, however, are not built at the Villiers factory at Wolverhampton, but are manufactured under licence by Hispano Villiers S.A., of Barcelona.

They do, nevertheless, conform strictly to the design and the quality of the British-made Villiers two-stroke mot, cycle engines of 122 c.c. and 197 c.c. capacity, which are the types on which the Spanish factory is at present concentrating. The Hispano Villiers concern has only been in pro-duction for two years, and before that time Villiers were represented in Spain by Autocesorios Harry Walker S.A., a company taking its name from the founder who left Britain shortly before the first world war to become a highly successful manufacturers’ representative.

Through the efforts of Mr. Walker several Spanish motor cycle manufacturers began to fit Villiers two-stroke engines to their lightweight machines, and as their quality, performance and reliability became more widely known the demand steadily increased.

The last war, however, brought a host of international trading difficulties in its wake, and Spain, like so many other countries, was compelled to impose import restrictions. As time went on import licences for motor cycle engines became scarcer and scarcer and early in 1951 investigations into the possibility of building Villiers engines under licence in Spain were started at the instigation of Autocesorios Harry Walker S.A. and some of the Spanish manufacturers of Villiers-engined motor cycles. 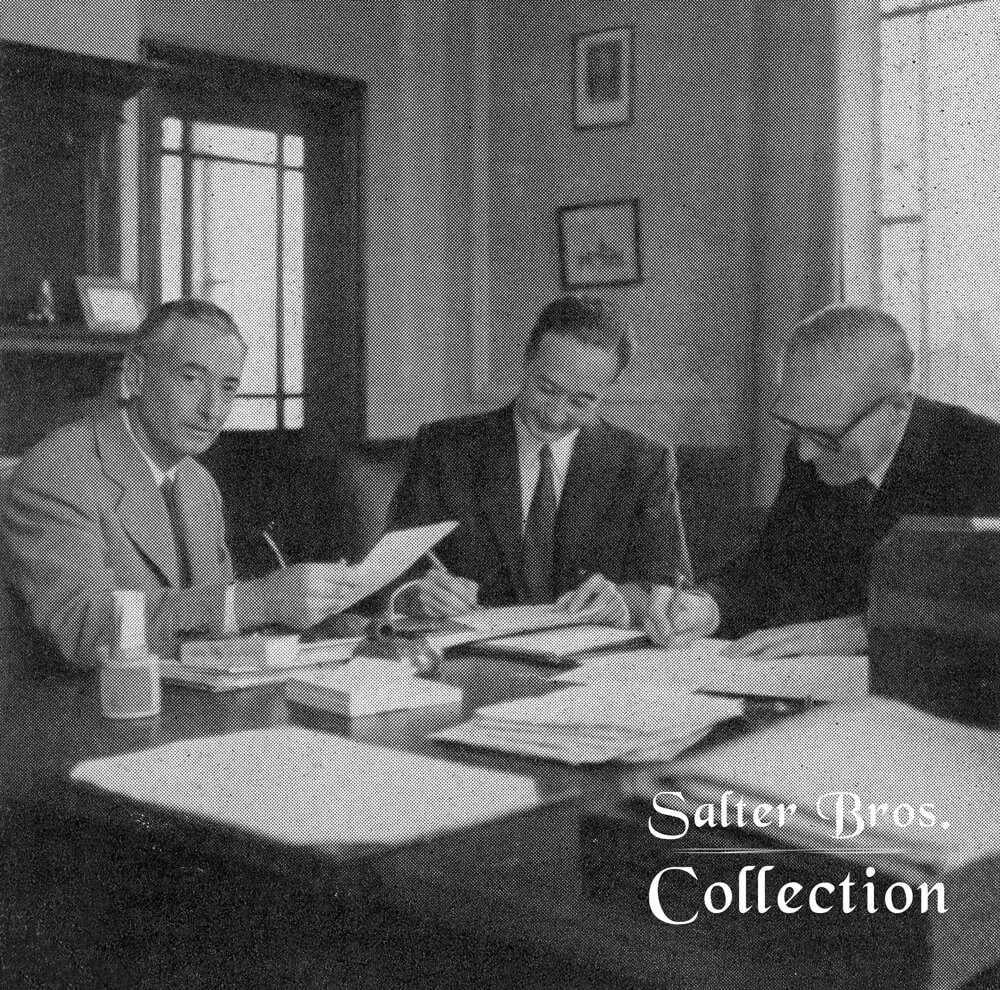 With the blessing of the Spanish Government negotiations were opened up with the directors of The Villiers Engineering Co. Ltd. and on August 3rd, 1951, full approval to the formation of Hispano Villiers S.A. was given and the contract was officially signed at the Wolverhampton factory on September 14th, 1951.

Before going ahead with the erection of a factory a team of Spanish technicians made an extended stay at Wolverhampton, where they made a very comprehensive study of the requirements involved in the manufacture of two-stroke motor cycle engines.

During this visit they not only learnt the basic essentials of quantity production so far as it effected engine manufacture, but also of the rigid quality control exercised at the Wolverhampton factory over raw materials and every manufacturing process.

While this survey was going on a factory site of 10,000 square metres (24 acres) was obtained in the San Andre’s quarter of Barcelona.

Plans for the factory were drawn up; building commenced in February, 1952, and was completed in March, 1953.

During the building operations technical details of the Villiers 122 c.c. motor cycle engine were studied by he Hispano Villiers engineers who had decided that this was the engine most suited to the needs of the Spanish market.

The necessary machines, jigs and tools were installed, and by May, 1953, the factory was equipped for production. 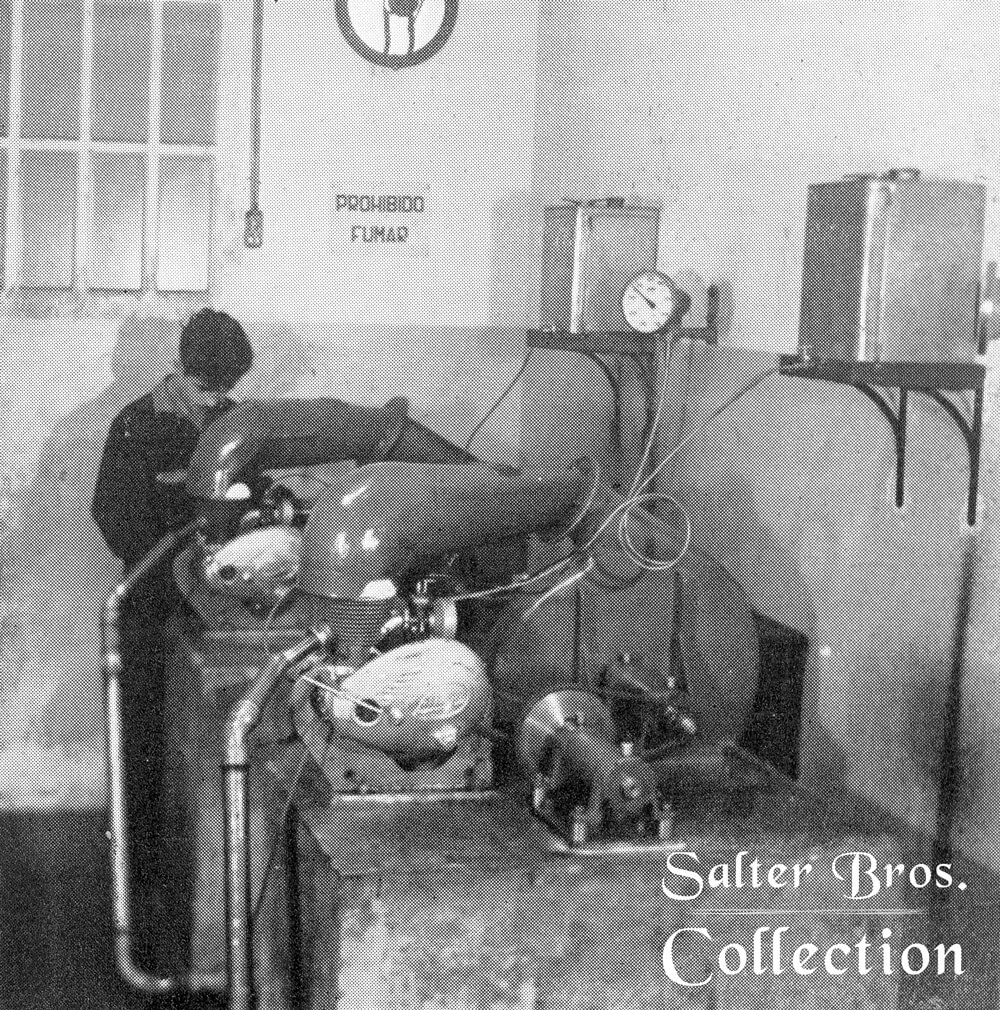 Test and inspection plays an important part in the motor cycle engine production at the Barcelona factory, and the picture shows two 122 c.c. units undergoing their final run on the test bench before despatch. 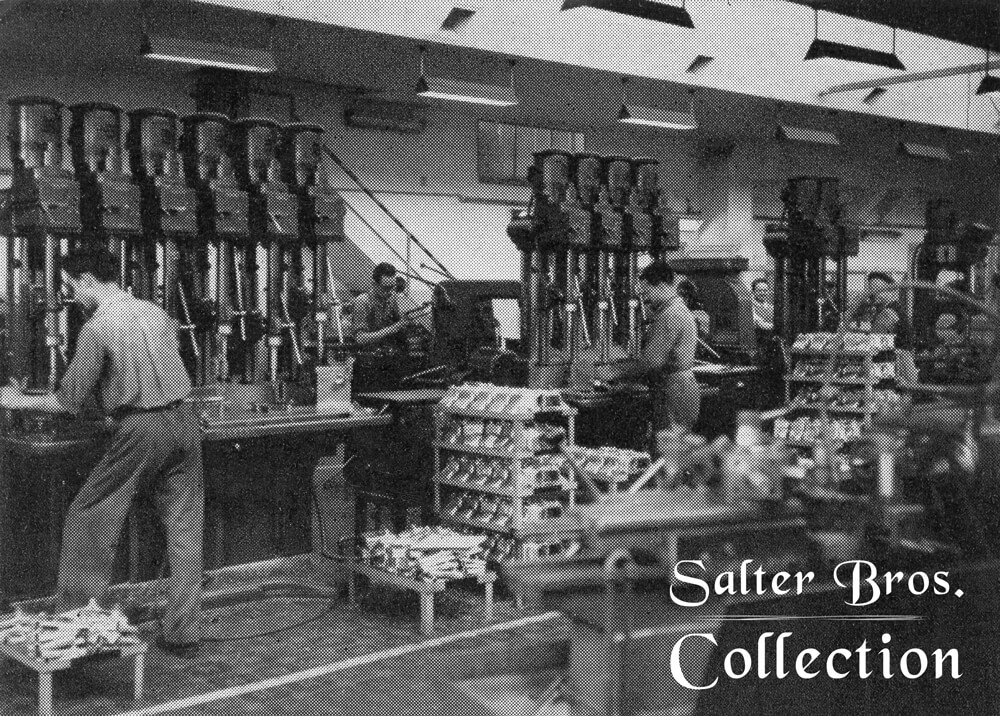 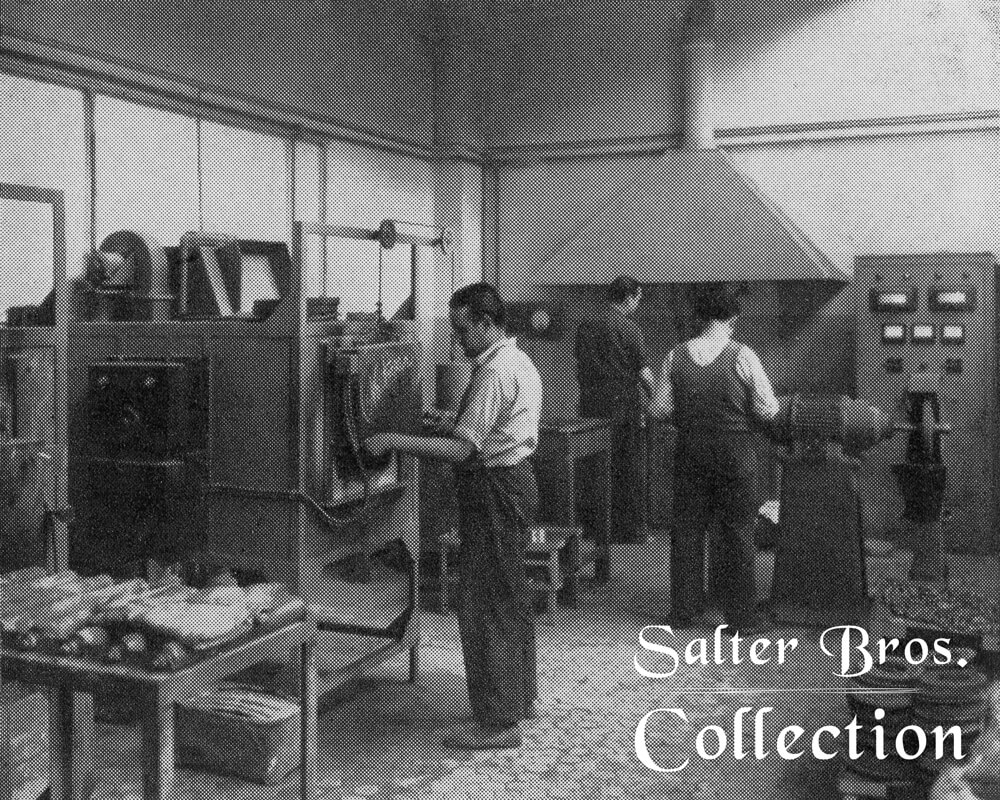 The picture above is a corner of the heat treatment shop. On the left engine components are being gauge tested in one of the inspection bays

The next stage was to engage and train a labour force, an operation which naturally delayed production, but which was very quickly completed.

All other Test and inspection plays an important part in the motor cycle engine production at the Barcelona factory, and the picture shows two 122 c.c. units undergoing their final run on the test bench before despatch difficulties associated with new undertakings of this nature were smoothed away and on September 1st, 1953, the first 122 c.c. Hispano Villiers two-stroke engine went on the test bench, to give a completely satisfactory account of itself. As production got into full swing more and more Spanish manufacturers became interested in the engines. By the end of July of last year production had reached 300 complete engines a month : by the following December it had topped the 400 mark.

For 1955 the factory planned an output of 5,000 engines and had decided to extend the range to include a 197 c.c. engine – again identical to the comparable unit produced at Wolverhampton.

Before the year was half-way through, however, demand had outstripped this figure, and plans have now been approved to extend the factory building and to step up production to 10,000 engines yearly.

As pictures on these pages show the Hispano Villiers factory has a particularly attractive external appearance, while the production shops have been planned to enable the operatives to work under ideal conditions – in well lit and spacious buildings without any hint of overcrowding or oppressiveness.

Most of the production machines are similar to those in operation in the Wolverhampton factory, and test and inspection plays as important a part.

The closest possible liaison is maintained between the British and the Spanish factories, regular visits being paid to Barcelona by Villiers methods engineers to advise on production techniques, while an equally frequent visitor to Wolverhampton is Dr. Ramon Pinto Oliveras, managing director of Hispano Villiers.

Engines leaving the well-equipped Hispano Villiers factory are high-quality products and are performing remarkable feats, particularly in the little three- and four-wheeled runabouts which have become so popular among Spaniards in recent years.

These can be seen daily tackling the steep mountain roads with a gay abandon that constantly surprises owners of high-powered saloon cars. The formation of Hispano Villiers has not severed the link between Villiers and Autocesorios Harry Walker S.A. On the contrary, the association has been strengthened. Sales of Villiers agricultural and industrial engines for Gibralta and Tangier are stit, handled by Autocesorios Harry Walker S.A., who are also the sales organisation for Hispano Villiers engines.

A number of directors, too, are on the boards of both companies, among them being Dr. Pinto and Don Enrico Colomina, who became managing director of Autocesorios Harry Walker S.A. on the death of Mr. Walker four years ago.

As the picture of one of the machine shops on the left shows operatives in the Hispano Villiers factory work in light and well ventilated buildings without any hint of overcrowding. 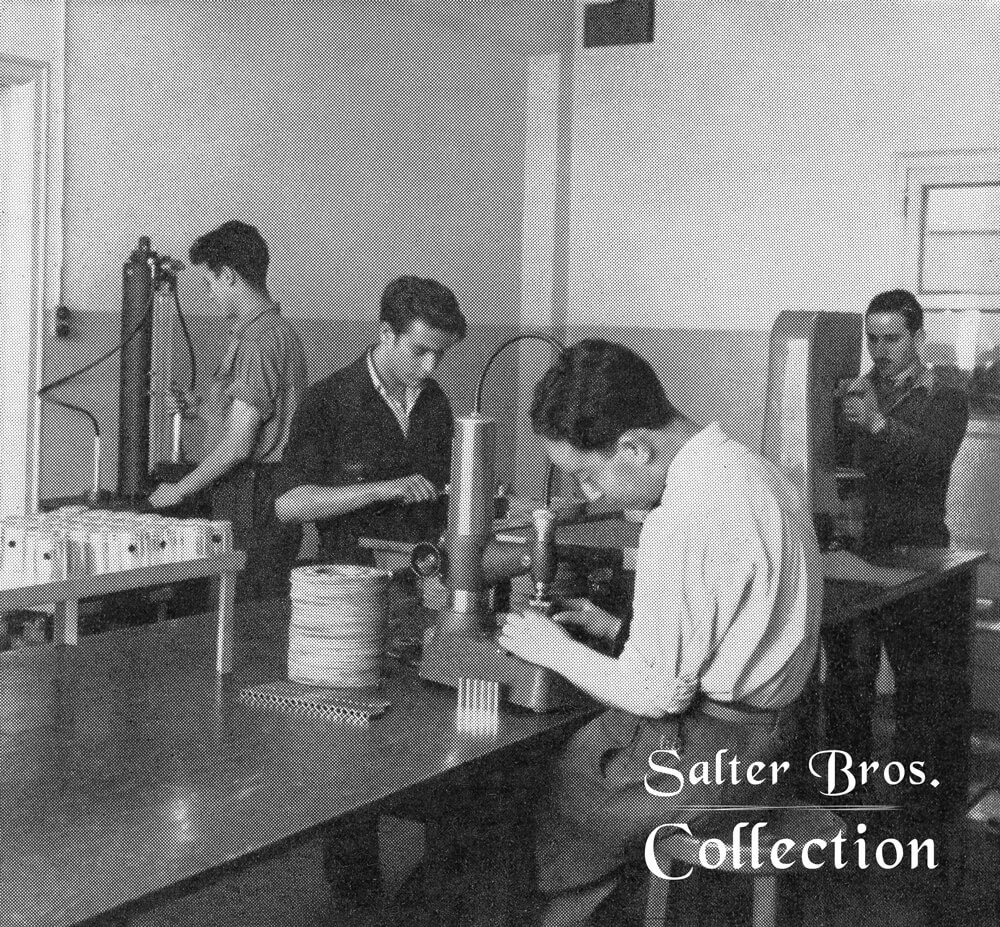 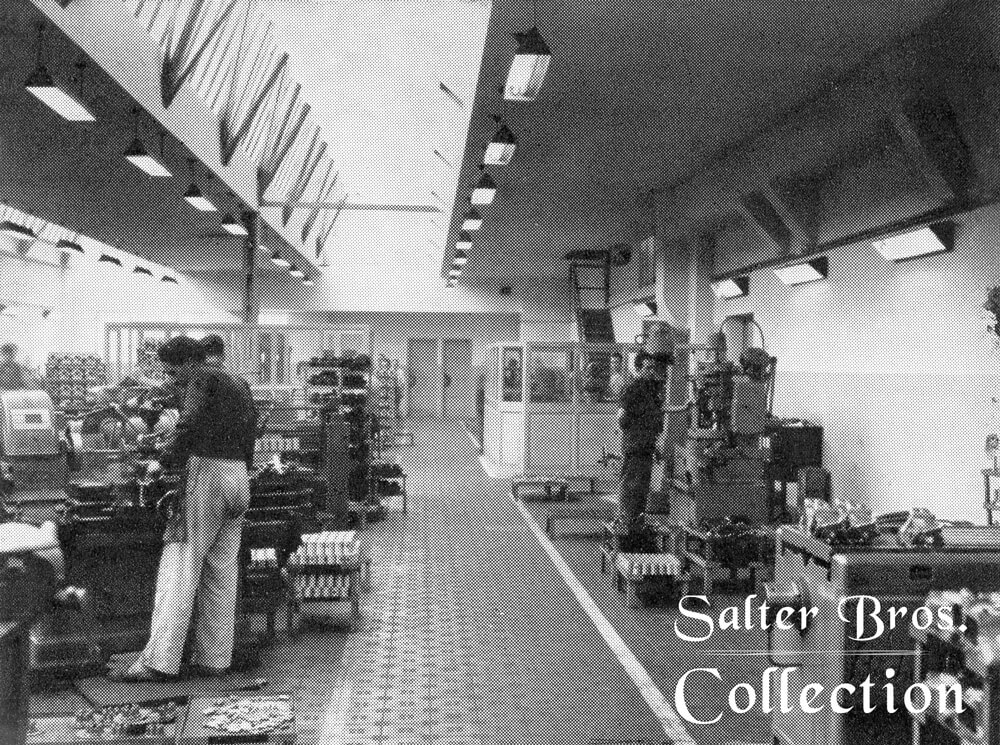 Picture above and left are of one of the machine shops.  showing operatives in the Hispanio Villiers factory work in light and well ventilated buildings without any hint of overcrowding. As at Wolverhampton cleanliness is a feature of all the production departments 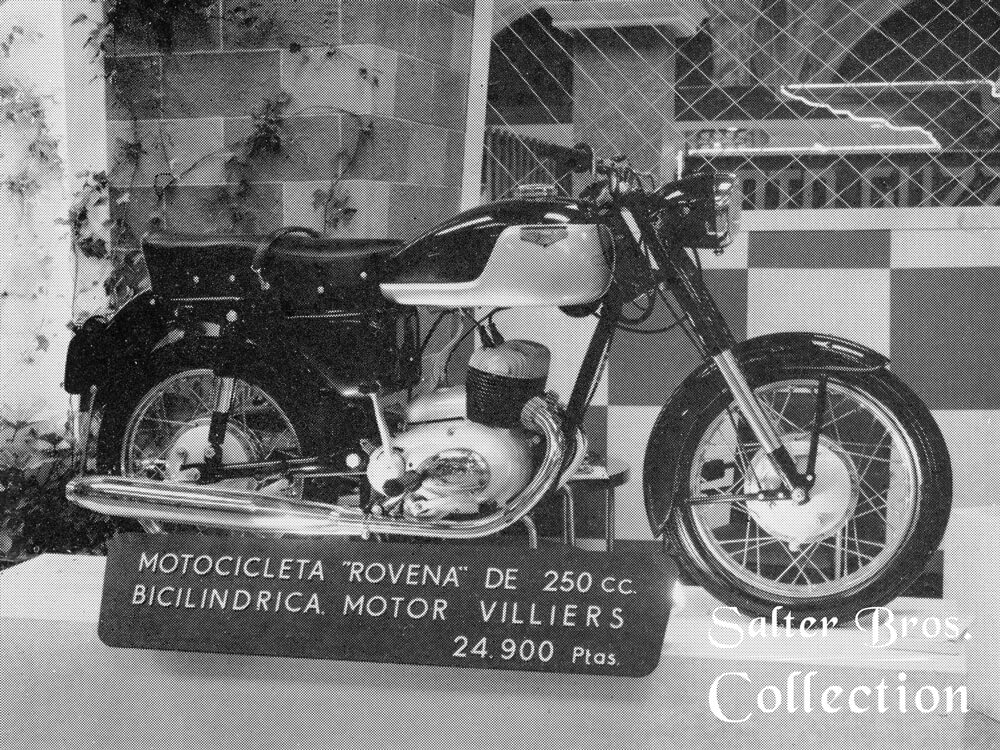 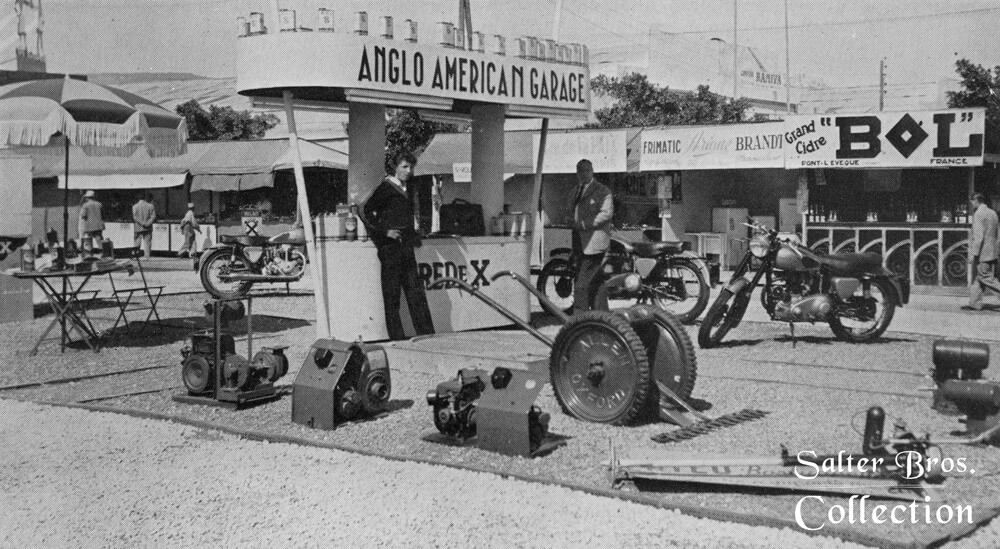 A number of Villiers-engined products were displayed by Villiers agents in Algeria, Anglo-American Garage, at last year’s Oran Show. The reliability of the two-stroke and four-stroke engines has led to a steadily growing demand for Villiers-powered equipment in this part of the world.