The year 1924 will one day be acclaimed as one of special importance and Moss Vale a town of greater historical interest, because of the fact that the greatest advance in soil cultural methods in the history of civilized mankind was made possible in that year and place, when manufacture of the HOWARD PATENT ROTARY HOE was commenced.

That a Rotary Hoe had not been perfected long years before is surprising.

The world had seen great changes and advances in almost every conceivable way—machinery, means of travel and communication, manufacturing, and many other transformations of the methods of older days—but soil tillage methods remained practically unchanged throughout the Ages.

Certainly, in ploughs metal had replaced wood, horses or even tractors had displaced cows, and the daily acreage possible increased; but the result of the operation remained much the same.

When HOWARD ROTARY HOES were launched upon an expectant, if incredulous world, a new era dawned in cultivation practice. Certain claims were made for the new implement. To many they seemed too ‘ good to be true, and conservatism, one of the natural safeguards of mankind, bade them wait—and watch.

In any case prices were soaring, returns were high, irrespective of the kind of soil tillage implements used—but still the business went steadily ahead from its inception.

A temporary lull occurred in 1930, when men on the land, like those otherwise engaged, were stunned by the changed order of affairs, and apprehensive of the future—but from that time sales rapidly increased.

We commend to readers the significant fact that when it became apparent only economy of operations, plus improvement in quantity and quality of products, could balance low returns, Rotary Hoe sales increased fourfold in four years. Below we illustrate by a graph the sales of this Company since its inception.

In itself it is a testimonial to the efficiency of Rotary Hoes, and a record of achievement which needs no further words from us to bring home its message. 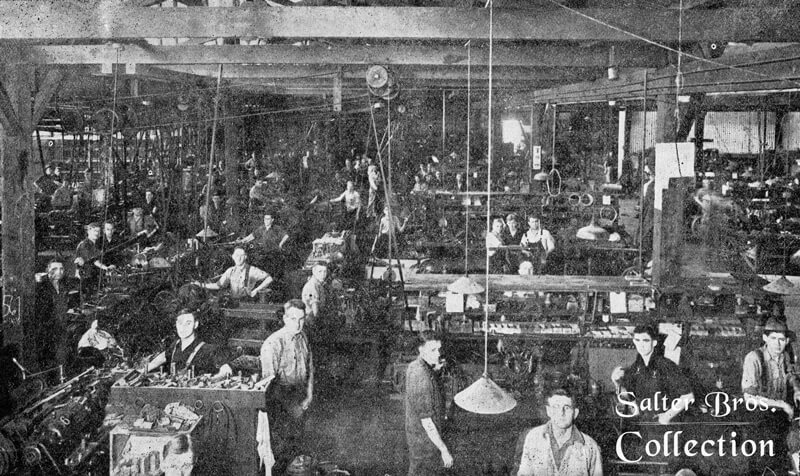 It is impossible to convey, in one photograph, a real conception of the extent and variety of machinery employed in making the component parts of our machines.

The same remark applies to area; the above picture takes in only a small portion of the tool area of our factory. The foundry, of course, occupies a separate building.