Firstly, I would like to thank the man who sparked my interest in Ronaldson Bros. & Tippett, who taught me everything he knew about big engines including Austral Oil Engines.

Les was a true mate to everyone who knew him, he would share any piece of knowledge with you that he could so that everything that he learnt over the years is passed on.

Although you are no longer with us Les, I thank you for everything you did for me over our friendship of just under 20 years.

Ronaldson & Co. was founded in 1903 by David Ronaldson.
David was born at Spring Hill which is near Allendale in Victoria.

He attended Smeaton Primary School and left the family farm at the young age of 15 to move into Ballarat to pursue a career in agriculture.

He started at his apprenticeship at Jas Smith Pty Ltd in Ballarat, an engineering firm that made all sorts of equipment including chaff cutters and saw benches.

After David finished his apprenticeship he became more determined to start his own firm, which he did with the help of his mother and brother to purchase the land and build the first factory (pictured to the right) in 1903. 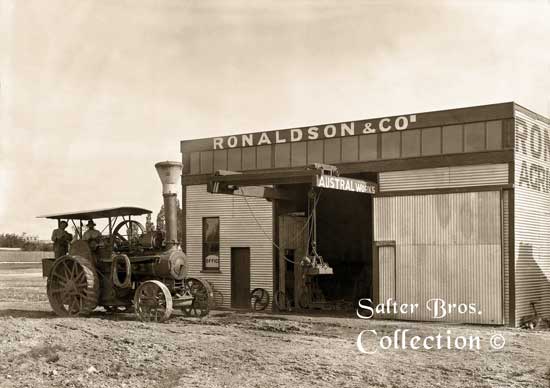 Adam Ronaldson who was a silent partner at Ronaldson & Co. and Herbert Tippett joined with David Ronaldson to form Ronaldson Bros. & Tippett.

Little did they know at that time that they would become one of the most successful engine manufacturers in the southern hemisphere.

A Tour of the Ronaldson Bros. & Tippett Factory 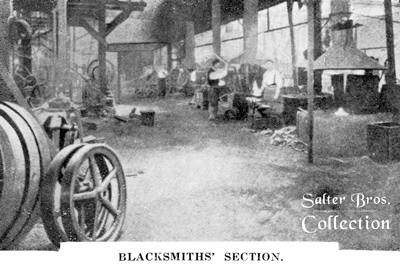 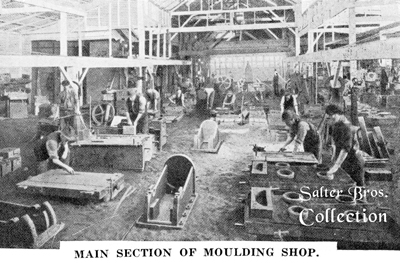 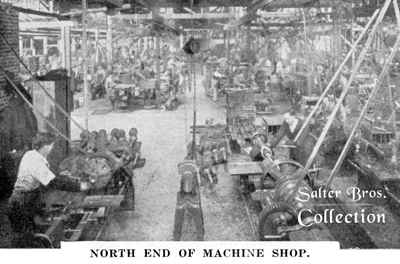 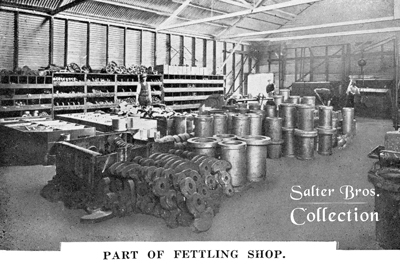 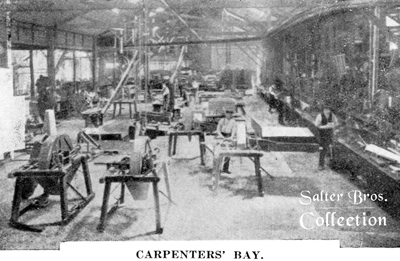 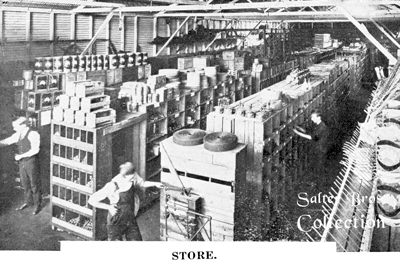 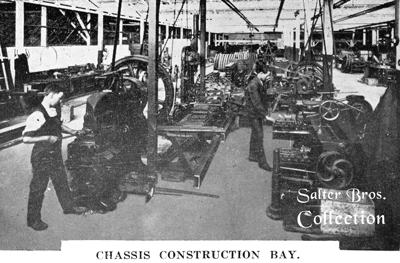 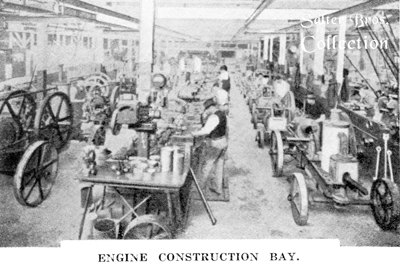 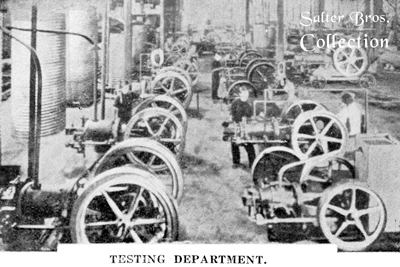 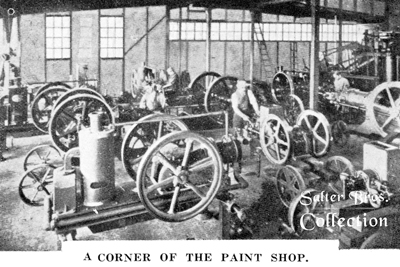 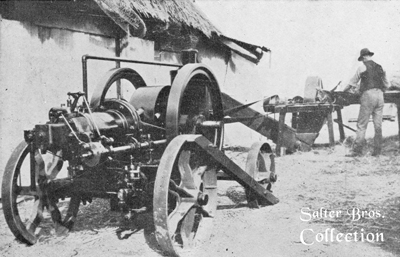 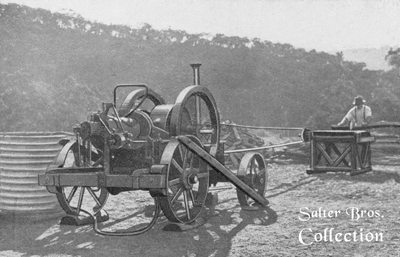 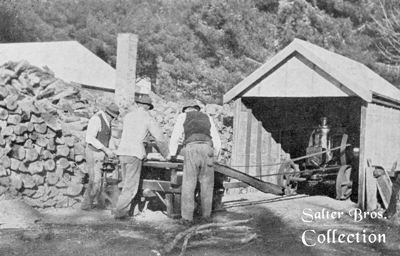 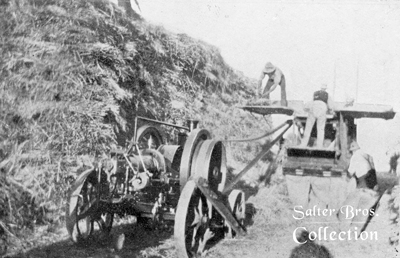 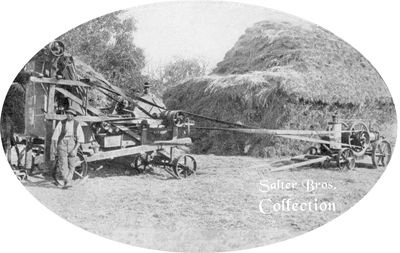 As with a lot of manufacturing companies during World War I and World War II, they were called upon to manufacture for the Australia Government for the war effort.

Ronaldson Bros & Tippett was no different, they were called upon during both world wars and made components and also supplied engines for the war effort.

1945 saw Ronaldson Tippett expand their operations again and build the new foundry on Norman Street, Wendouree, just up the road from the existing engine works. 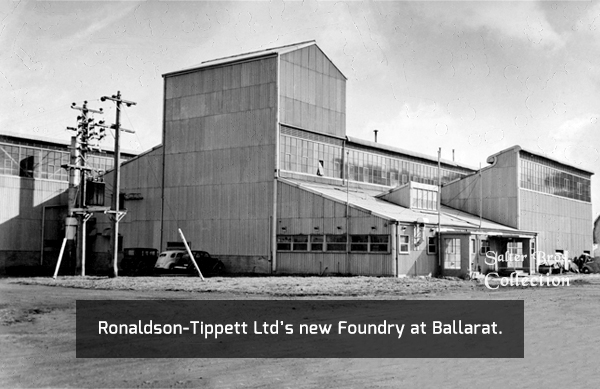 1945 saw Ronaldson Tippett expand their operations again and build the new foundry on Norman Street, Wendouree, just up the road from the existing engine works. 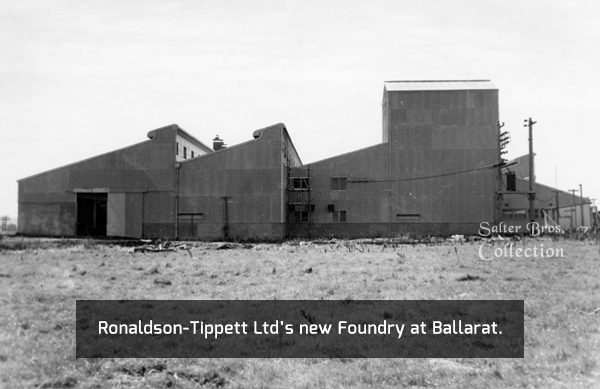 August 1949 – A 51% controlling share of Ronaldson Bros. & Tippett was sold to Wisconsin Motor Corporation which enabled Ronaldson Tippett to manufacture the new range of Wisconsin engines.

In Mid-February 1970, employing $350,000 advanced by Barewa, Paxton and Cornelius purchased a controlling interest in Ronaldson Bros and Tippett, a listed public company, on behalf of themselves and John Miller.

Miller at that time a representative on the board of Ronaldson Bros. and Tippett of the majority shareholder. The plan was to convert Ronaldson Tippett to a mining company, speculate in its shares and make profits from selling mineral claims to it.

The achievement of the objectives in Ronaldson Bros. and Tippett was frustrated when the Stock Exchange, suspecting that this takeover may have been aimed at achieving a “back door listing” for Barew, threated to suspend the listing of the Ronaldson and Tippett shares. Miller, then Cornelius withdrew from the enterprise.

Eventually, Paxton disposed of the majority of the Ronaldson Bros. & Tippett shares. (presumebly to Merbank Corporation).

Ronaldson Tippett Ltd has made a private placement of 200,000 shares and will make a 20-for-one share split. This follows a change in control of the company.

A report from the company said an agreement had been reached with various persons and companies who acquired the controlling interest in Ronaldson Tippett held by Wisconsin Motor Corporation.

Under this agreement Messrs. R. B. Ronaldson, E. J. T. Tippett, T. W. Higgins and R. C. Jackson have resigned from the board and have been replaced by Messrs. J. O. McPhee and F. R. McPhee.

The placement of 200,000 shares, at the $2 par value has been made through a member firm of the Melbourne Stock Exchange and will raise $400,000 in additional working capital.

Directors also announced a 4 per cent. Lift in sales and higher profits for the December half-year. Interim dividend has been omitted to conserve funds. The new management intends to continue the company’s operations, subject to a review of the opportunities for further economic improvement. Directors add it is not their intention “To make an offer for the acquisition control of the share capital of any other public company.”

1st of April 1971 – The Sydney Morning Herald
Merbank Corporation announced that they were going to merge their engineering operations with Norton Villiers Australia Pty. Ltd.

Keysley moves to take over Merbank – Melbourne – Merbank Corporation Ltd looks set for its second facelift in less than a decade. The investment group began its corporate life in 1937 as engineering company, Ronaldson Bros and Tippett Ptd Ltd. Taken over by the syndicate House investment group in 1969-1970 the company launched successful takeover offers in all directions in the early years of this decade. Now it looks certain to be on the receiving end of a succesful takeover coup.

Keysley Ptd Ltd, a private company which “represents interests associated with Mr Morris Joss and interests associated with Mr Roy Tashi” launched a $1.85 a share bid yesterday for 60 per cent of Merbank’s issued capital. Keysley directors wrote to the chairman of Merbank, Mr J. N. Marks, yesterday and said they had already agreed to buy 664,231 fully paid Merbank shares and 69,000 part paid units. This represents about 30.2 per cent of Merbank’s paid-up capital.

Keysley also said it would offer $1.85 for each partly paid share, less the amount outstanding on each share. The $2.4 million offer values Merbank at about $4.1 million, substantially higher than its recent share price or asset backing would indicate. Merbank shares have sold as low as $1 on the Melbourne stock exchange this year, with the group’s price on June 1 only $1.20. Asset backing was not much higher at $1.34 at last year’s balance date. Both Mr Morris Joss and Mr Tashi are priminent and active members of Melbourne’s business community.

Mr Morris Joss said last night that Keysley would maintain Merbank’s business as it is now. But he said the parties involved in the takeover had thoughts about creating a new foods division. This could fit in with Merbank’s present activities of making and wholsaling for the pastrycook and meat industries.

The only part left of the Ronaldson Tippett Factory on the corner of Creswick Road and Howitt Street was demolished.

Now on the site of Ronaldson Bros. & Tippett sits a service station and a Carls Jn burgers restaurant.

The only thing left on the old Ronaldson Bros. & Tippett site that tells you where a once great factory stood with an amazing history is a flywheel and a plaque to commemorate the RonaTip Rally in 1994 which was hosted by the Ballarat Engine and Machery Preservation Society Inc. 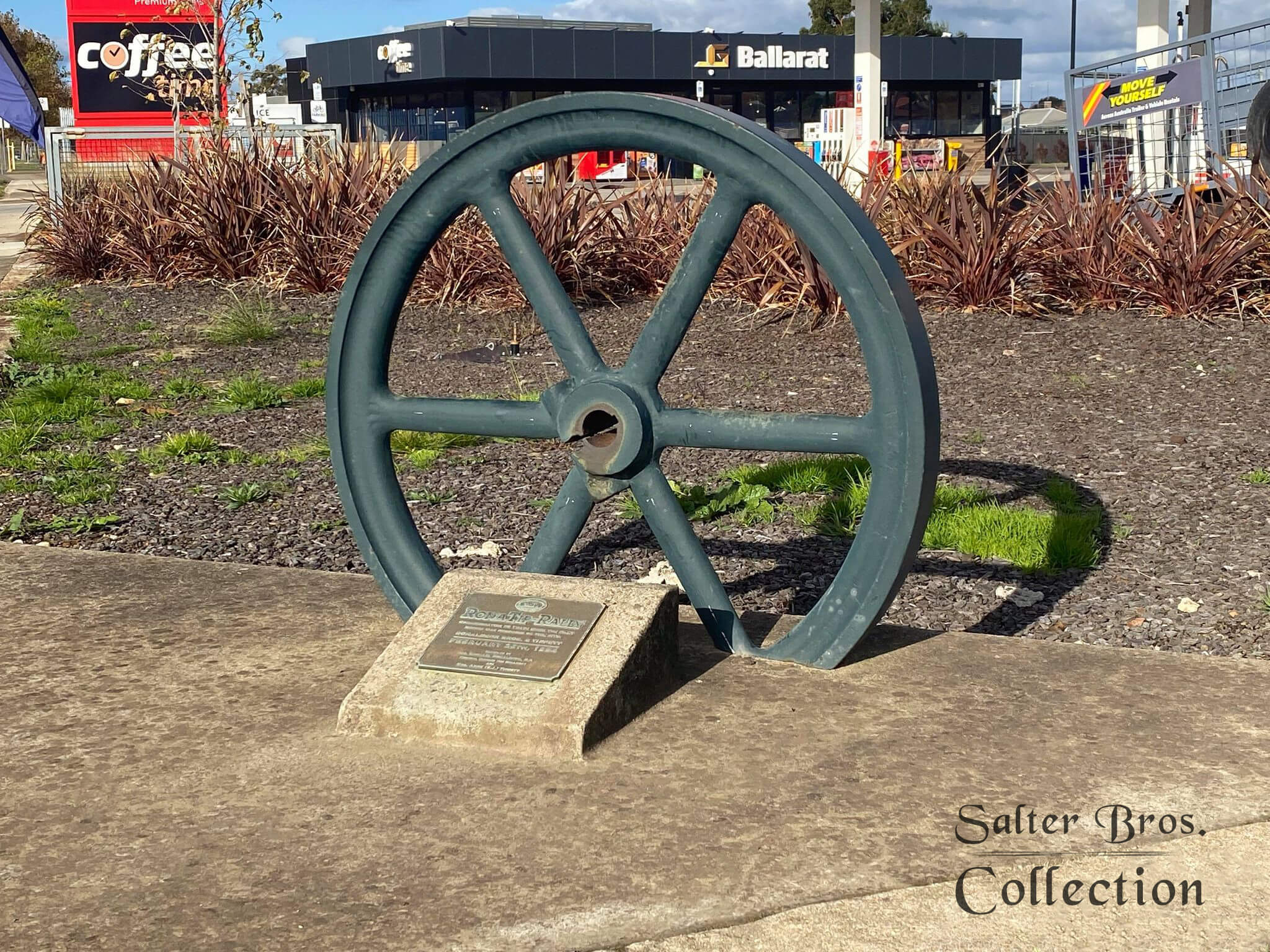 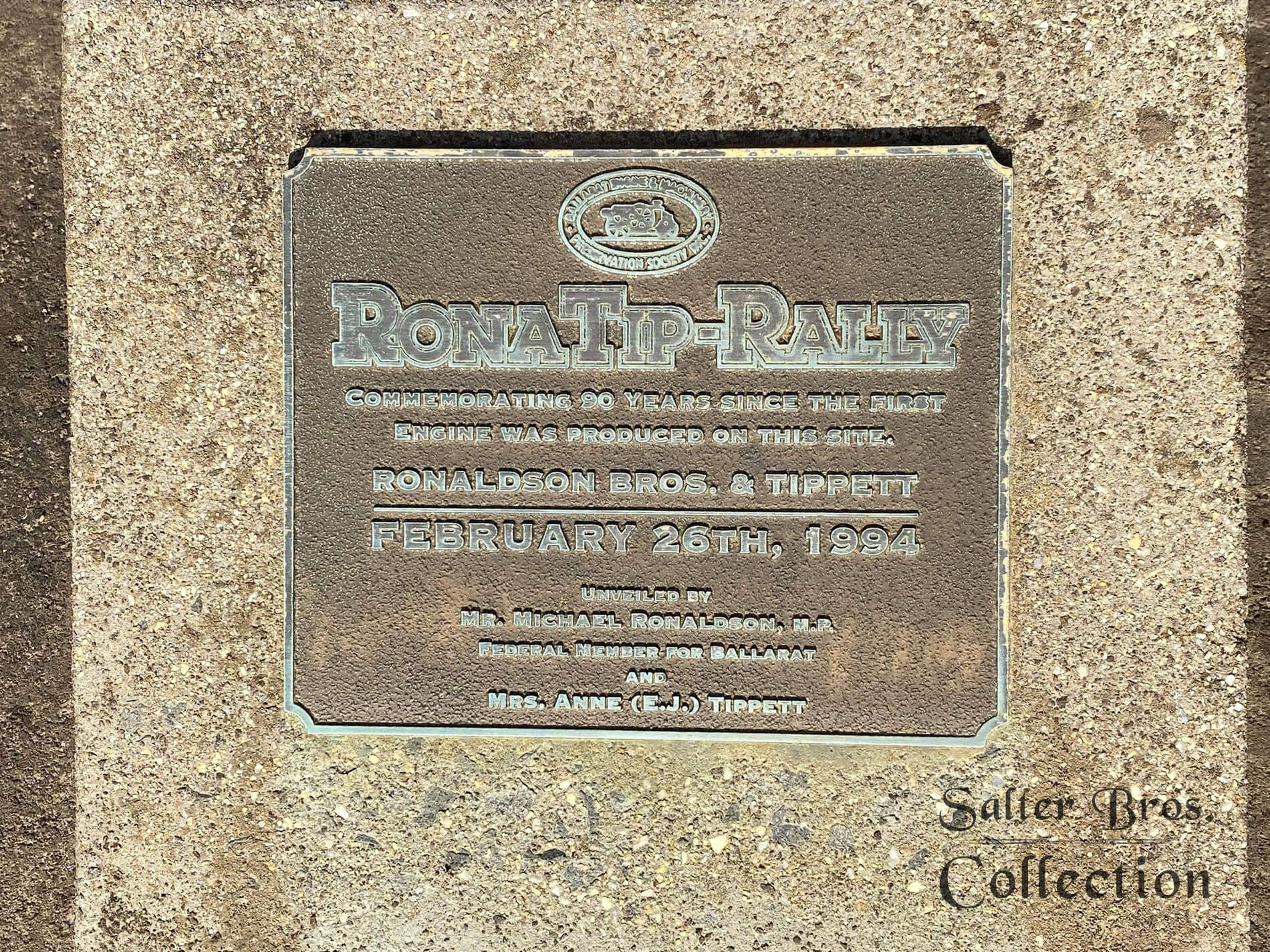